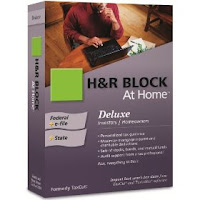 The folks at H&R Block have provided me a copy of H&R Block At Home Deluxe (retail value $45) to give away to one of my lucky blog readers. H&R Block At Home was formerly known as TaxCut. This giveaway is for a new Deluxe (Tax Year 2009) version of H&R Block At Home which includes tax preparation for both Federal & State returns. That should be adequate for most people to complete their own taxes. Although the software includes free federal e-file, you may have to pay extra if you want to also efile a state return.

I have decided to hold a random drawing for the software. You can have up to three chances to win the prize:

1) Any reader can post a comment below describing your best tax or money saving tip.
2) For an additional entry, web site owners can link to this post, to let other know about this contest.
3) Lastly, my fellow bloggers can add PFStock to your blogroll (must be accessible from blog's main page) for one more entry in the drawing.

There is one more step. Since Blogger does not automatically collect contact information, and I allow anonymous comments, you will need to send me an Email message letting me know that you posted a comment, created a link to my post, and/or added PFStock your blogroll. (My E-mail address is in the sidebar of my blog.)

The drawing is limited to US residents. The software requires Windows XP, Windows Vista, Windows 7, or Mac OS X 10.4.11 or greater. The winner will be randomly picked from among the qualified entries received by February 12. I will contact the winner to get their mailing address, and I'll pick up the cost of postage. (Note that the software come in a sealed retail box, but it got a little bit crushed when it was mailed to me.) Good luck to everyone who enters!

This promotion is held in conjunction with PFStock.com.
Note: H&R Block At Home software was provided for review by H&R Block. All opinions expressed are my own.
Posted by pfstock at 7:59 AM 4 comments

Do You Need 60X Annual Expenses to Retire Early?

Three years ago, I published a post titled The Millionaire's Rule of Thumb which presented an often quoted formula for expected net worth based on age and income. Many readers have expressed their dissatisfaction with the formula which is attributed to the book, The Millionaire Next Door by Thomas Stanley and William Danko. I predicted that someday a reader would develop a new and improved formula.

Three years to the day after I first posted that article, a reader who goes by the name of "dunkelblau" has indeed come up with a new and improved formula! Below is summary of dunkelblau's comments taken from this post, and from my very popular Net Worth Update post. (Note: Comments have been edited.)

I agree that wealth should be measured in units of time rather than dollars -- as in how long you can holdout without any wage income. But the correct denominator is annual expenses, not annual income. You're ready to retire when your networth divided by your annual expenses reaches 100 minus your age in years.


I don't blame you if you didn't catch that.  What the reader is saying is that if you take your net worth and divide that by annual expenses, that should equal 100 minus your age. The reader refers to net worth as the "numerator" and annual expenses as the "denominator". Reading on, dunkelblau continues by saying:

Investing well increases the numerator, but even investing badly still shrinks the denominator (assuming you don't borrow to invest). I think a conservative target number [for this quotient] is 100 minus your age in years. This way there's little chance of outliving your money.


So, as further clarification, another way to say this is that your net worth should equal your annual expenses times (100 minus your age):

Lets take the example of a 40 year old who has saved $1 million for retirement. If this person can reduce expenditures to $40,000 per year, a common rule of thumb is that one can live off of the $1 million saved by assuming a conservative 4% safe withdrawal rate. See Resources for Early Retirement.

However, the "new and improved" wealth formula dictates that one needs (100 - age) times annual expenses to retire. In the case of a 40 year old, that would be 60X annual expenses, or a whopping $2.4 million for this individual to retire! Conversely, this person could further reduce their spending to less than $17,000 per year in order to live off of the $1 million. No wonder people assume that early retirement is impossible! The other curious thing about this new "formula" is that as one ages, the expected net worth actually goes down if annual expenses are kept constant. The one thing that I agree with dunkelblau about is that if you follow this formula, there is little chance of outliving your savings.

Anyway, my common sense tells me to take dunkelblau's formula with a grain of salt. In my opinion, this is definitely a new formula, but where is the improvement? What do the readers think?

Back in November, I wrote a post about buying Merck. I made this decision based on a stock analysis service called MarketClub. This is part of a website called INO.com (pronounced "I know") where I can research stocks, futures, or forex products. I recently used their Trade Triangle analysis to help me decide on buying Merck & Co (NYSE: MRK).

At the time of my post, Merck & Co (NYSE: MRK) was trading around $34, but it has increased significantly since my previous post. I had actually bought the stock about a month earlier than my post. Although I usually don't disclose the full details of my stock transaction on my blog, I thought that it would be instructive to share the details of this trade. For my own reference, this post will serve as a record of a trade that I got right.

Here is the summary of my trade: On 10/12/09, I bought 300 shares of MRK at 32.99. On 12/24/09, I sold 300 shares of MRK at 36.76. As I mentioned, the opening transaction was based on technical analysis done using Trade Triangles from MarketClub portion of the INO.com website. The closing transaction is due to a stop order that I placed after the stock started to move up. The idea behind a stop order is to protect gains from a potential decline in the stock price. However, volatility will sometimes cause one to be "stopped out" prematurely. That is one danger of placing a stop order.

On a percentage basis, this trade was not as successful as my investment in Bare Escentuals (NASDAQ: BARE ). Nevertheless, it still represents an 11.4% gain over the period. I don't usually compare my trades with the S&P 500 index, but I know that a lot of investors consider that to be an important measure of success. For the record, the S&P rose 4.6% over same period. The difference between my return and the S&P is 6.8%, and is referred to by some analysis as "alpha". There are entire websites that exist for the sole purpose of seeking positive alpha.

From a personal standpoint, I am always happy to rack up a good gain regardless of whether it generates a positive alpha. I also can't argue with success, and while I was at first very skeptical of technical analysis tools like Trade Triangles, I have had good success with INO.com, so I intend to continue using this technique in my investing.