Last week, I mentioned that TD Ameritrade was paying 0.00% APY interest on funds in its Money Market Sweep account. (See Money Market Rates) TD Ameritrade is not alone. Here is a recent screen capture that I took from the E*TRADE website: 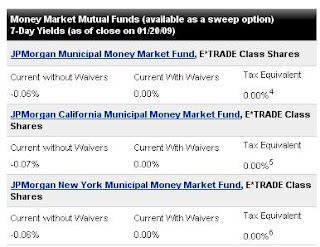 The table shows that E*TRADE's nominal interest rate for three of its money market funds is actually negative. With waivers, the interest rate is 0.00%. Note that these are the rates paid by E*TRADE Brokerage in their cash sweep accounts; it is not the same as the 3.01% rate that E*TRADE Bank offers for their FDIC insured bank accounts.

And here is a screen capture that I took from the TD Ameritrade website:

At this point, the next question that comes to mind is "Can interest rates on money market funds go negative?" I'm here to tell you "Yes, they can!" Indeed, you can actually lose money in a money market fund. I will note that each money market fund has a disclaimer that looks something like this:

An investment in any money market fund is neither insured nor guaranteed by the Federal Deposit Insurance Corporation or any other government agency. Although the fund seeks to preserve the value of your investments at $1.00 per share, it is possible to lose money by investing in the fund.


Essentially, the brokerages are saying that you are taking a potential risk by putting your uninvested cash in a money market fund vs. an FDIC insured bank account. And they are paying you nothing (and actually penalizing you) to take that risk. That said, I am in the process of moving my money to safer FDIC insured investments.

Interest rates have dropped considerably over the past few months. My October post on the same topic will give you a historical point of reference. It has been difficult to keep track of the rates that I've been getting in my various money market accounts. So, I've decided to periodically post a list of the annual percentage yields (APYs) for institutions that I have accounts at, or have otherwise mentioned in the blog. These rates are sorted by APY.

Rates are believed to be accurate as of 1/21/09. I did not include banks that had special, or introductory rates in the list because these are not ongoing interest rates. I am also not including non-liquid accounts such as CD's in the list.

Overall, I think that the results of my survey have been dismal. Though I do business with both E*TRADE and Umbrellabank, I don't have the specific types of accounts that I mentioned in this post. I guess it is time to move some money around.

The TD Ameritrade money market fund rate is not a typo! They are indeed paying 0.00% to hold onto your money. This situation has me very nervous. Coupled with other ongoing issues I've had with TD Ameritrade, I'm seriously beginning to consider moving my assets to another brokerage.

In these times of uncertainty, I can offer two pieces of advice that I think few people would disagree with:
1) Never exceed the FDIC insurance limits.
2) Don't keep all of your money in one place.

Did I Buy a Defective DVD Recorder?

With the coming transition to digital television (DTV) on February 17, 2009, all regular television stations in the United States will stop broadcasting in analog and switch exclusively to digital broadcasting. Several PF blogs such as My Wealth Builder and Realm of Prosperity have written about buying DTV converter boxes which allow standard analog TVs receive digital broadcasts. The federal government has offered a coupon of $40 for each coupon-eligible converter box (CECB) purchased, limit two per household. I, too, purchased a DTV converter box, and was also impressed with the picture quality even on a standard definition TV (i.e., a tube TV).

However, I now had a VCR, DVD player, and a converter box connected to a single TV set. And I needed FOUR remote controls to operate this conglomeration of techno-gadgets. Using this setup, performing a task like the timer recording of TV programs on the VCR is problematic. Essentially, one has to setup the VCR to record from the converter box, and leave the box on and tuned to the channel you want to record. Many converter boxes will automatically turn off after a set amount of time, so you also have to override that feature.

I lived with this setup for a couple of months before I decided that there must be a better way. I purchased an LG RC897T DVD Recorder/VCR Combo with a built-in digital tuner on eBay. The main features of this unit are a VCR, a DVD recorder which can record from TV or video, and a digital tuner. Theoretically, this one machine replaces my VCR, DVD player, and the DTV tuner box. I have confirmed that each of these functions are properly supported, and I am down to only two remote controls -- one for the TV, and on for the DVD/VCR combo. In addition, the built-in NTSC/ATSC tuner is capable of receiving analog TV, analog cable, digital broadcast TV and digital clear QAM (which is used for digital cable broadcasts). The machine also has a USB port that allows the user to show pictures or play music (MP3's) that is stored on a flash memory drive.

The DVD recorder supports a variety of different DVD media: DVD-R, DVD+R, DVD-RW, DVD+RW, and DVD-RAM. Each format has its own little quirks, and knowing the differences between them is confusing at best. Like many users manuals these days, the RC897T instructions are not very clear. In any case, neither the DVD recorder nor the VCR will allow the user to record copy protected material, such as commercially produced DVDs or VHS tapes (e.g., the movies that you would rent at a video store). I guess that it makes sense that they would prohibit you from copying these movies.

Now the main point of this post is to ask whether or not you think that I purchased a defective DVD recorder. The main symptoms go something like this: I setup the DVD recorder to record a program from the TV. Most of the time, this happens without a problem. But occasionally, the DVD recorder will stop recording in the middle of a program for no apparent reason. I have read a few product reviews citing the same issue. Many people who bought an LG RC897T do indeed believe that the machine is defective, and they are not alone. Some reviews have stated that the LG RC897T is an unreliable, useless piece of junk, and that it just shuts off during DVD recording of TV programs. Doing a search on eBay, I have found a company that appears to handle returns for Best Buy. They literally have hundreds of these "defective" RC897T DVD recorders in stock, and are auctioning them off for considerably less than the $280 retail price at Best Buy. I assume that these are all product returns.

However, my investigation leads me to believe that my DVD recorder is not actually defective. Rather, the seemingly random failure of the DVD recorder is actually a "feature" called CPRM. Buried in the instruction manual is a short description of CPRM which stands for Content Protection for Recordable Media. Basically, TV broadcasters seem to broadcast CPRM flags (which instruct DVD recorders like the LG RC897T to stop recording) at completely random times. Presumably that is to prevent people from recording copy protected material. However, I (and other reviewers) have found that sometimes the DVD recorder will stop recording at the most unusual times, for example, in the middle of a commercial. Others speculate that broadcasters and advertisers insert these CPRM flags as a way to force you to actually watch TV in real time, and not skip the commercials. I know for a fact that my DVD recorder stopped recording toward the end of an "Amazing Race" episode, just before you found out who got eliminated.

For people who have a DVD recorder, and experience this problem, the instruction manual does describe a workaround to this CPRM recording issue. You have to use DVDs that are formatted in VR mode, and the DVD media has to be either a DVD-RW or a DVD-RAM. My experience is that this always records CPRM material. But, I found that these formats do not always play back in other DVD players. Sometimes, the playback will work up to a point, only to have the player stop when it encounters a CPRM flag. Some DVD players let you know this fact, while others will stop playing without explanation, making you wonder if you have a defective DVD. Also, you can record CPRM protected programs to the VCR portion of the LG RC897T without any issue, but then the recording will be analog instead of digital.

So, can anybody else weigh in on this issue? By the way, the LG RC897T DVD/VCR combo is very similar to the JVC DR-MV100B DVD/VCR combo, which has many of the same features.

Around this time of year, I start looking for the new version of Microsoft Money. Last year, I bought Microsoft Money Plus (2008) at the same time that bought my tax preparation software. But to tell the truth, I still have not installed MS Money Plus yet because some reviews I've read indicated that there were only minor changes from Money 2007. Anyway after searching a few stores, I came to the following conclusion: There is no Microsoft Money 2009.

How can that be? Doesn't Microsoft release a new version of their Money software each year? After some digging around, I found my answer in one of the Microsoft community discussion groups:

Microsoft Money Plus continues to be a valuable tool for our customers; however the feedback we are hearing is that the incremental updates to the software don't merit a new product every year. Given this, we have decided against releasing a 2009 version of Money Plus.

We are moving off of an annual release cycle for Microsoft Money Plus (no Money 2009 version in the fall), with future release dates TBD. Money Plus continues to be a valuable tool for our customers, however the feedback we are hearing loud and clear is that, after 17 years in the market, the incremental updates to the software don't merit a new product release every year. Given this, we have decided against releasing a 2009 version of Money Plus.

I guess that what I said was true: there are only minor changes in the yearly updates to MS Money. So Microsoft made the decision to not update MS Money for 2009. There is a new version of Quicken 2009, though. I might consider getting that.